Taekwondo is a martial art of blocking, punching and kicking for self defense. It is also a philosophy that emphasizes respect and integrity. Literally translated, taekwondo means “the way of the hand and foot.” It traces its roots back 2,000 years to traditional Korean martial arts such as t’ang-su, taek kyon, tae kwon, kwonpup
and tae kwonpup.

Taekwondo is one of the most highly evolved and fastest growing
martial arts in the world. More than 1.5 million people in the United States and another 50 million in 175 countries  practice taekwondo. It is also an officially recognized Olympic sport.

Modern taekwondo emerged in the 1940s and ’50s, when the masters of Korea’s major martial arts schools agreed to consolidate the country’s various native martial arts under the name taekwondo. The South Korean government made the unification official in 1961. Grandmaster S.W. Park started teaching taekwondo in the Portsmouth area in 1985.

Taekwondo’s American governing body is USA Taekwondo in Colorado Springs, Colorado. The international governing board is the World Taekwondo Federation based at the Kukkiwon in Seoul, Korea. 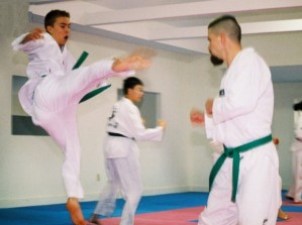 Taekwondo is best known for its sophisticated — and devastating — kicking techniques. The repertoire of kicks in taekwondo is much larger than those in other martial arts. Due to their effectiveness, these kicks are increasingly incorporated into other martial arts. Nevertheless, they remain distinctly Korean.

Taekwondo involves many standard and specific exercises to develop one’s body and mind. Philosophy is incorporated into the physical training. One must realize not only how, but why something is done to be proficient in the techniques.

Basic techniques begin with stances, blocks, punches and kicks.
These evolve into advanced procedures, such as sliding and jumping kicks and combination techniques. The practicing of forms develops one’s memory, concentration and coordination. Forms
are a sequence of prearranged patterns that mimic basic techniques in taekwondo. They are an integral component in developing proper and complete taekwondo skills. Taekwondo continues to offer challenges in techniques even to the most advanced students.

Self defense, the initial rationale for taekwondo’s development, is still a strong element in taekwondo training. The techniques, while controlled in the dojang, are nevertheless developed for real-world confrontations. They have evolved from actual combat techniques
proven to work for ancient warriors and modern martial artists. Some techniques have been modified for greater effectiveness in modern society, while others remain the same as those of long ago.

Taekwondo: for a better life

The exhilaration of a great workout. The confidence that comes with self-defense skills. The wisdom of knowing how to use those skills. Taekwondo, the Korean martial art and way of life, is all of those benefits and more. World Taekwondo Federation Grandmaster S.W. Park. has dedicated his life to taekwondo, from his youth in South Korea to more than 30 years of teaching in the Seacoast region of New Hampshire and Southern Maine. He has guided students of all ages, physical condition and ability level to the physical and mental benefits of the world's fastest-growing martial art. Please explore these pages to learn about the rare opportunity that Park's Taekwondo school offers to study with an eighth-dan grandmster and a dedicated team of fifth- and sixth-degree masters.